Home Betting News All The Events Canceled Due to Coronavirus

All The Events Canceled Due to Coronavirus 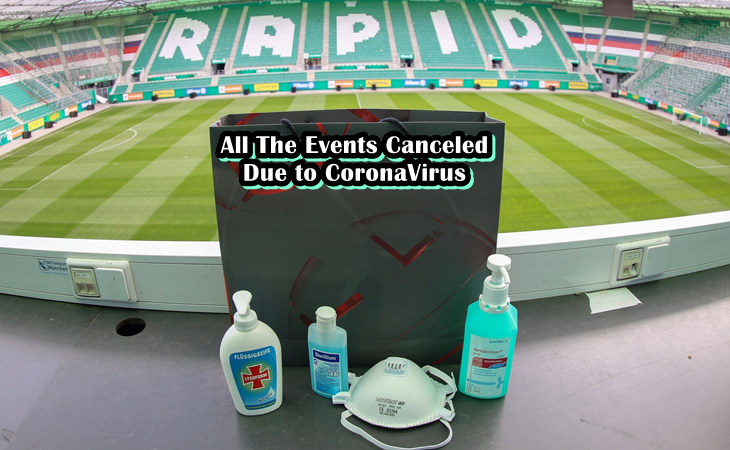 All the major event supports either canceled or postponed by the Coronavirus. Including Premier League, Euro 2020, rugby in England, boxing and golf. The continuous coronavirus pandemic has wreaked chaos on the worldwide sporting calendar.

The Football Association, the English Football League, the Premier League, FA Women’s Championship and FA Women’s Super League all called a halt to the action.

Meanwhile, England’s cricket team has also cut short their tour of Sri Lanka. The Grand National, horse racing’s flagship race, and the London Marathon also have been called off for now.

Here’s in this article we have listed all the major leagues and how all these have been impacted by Coronavirus.

One of the Rhinos’ players put into self-isolation after showing symptoms of coronavirus. Therefore, the Super League match between Catalans Dragons and Leeds is postponed.

The Coral Challenge Cup fixture between York City Knights and Rochdale Hornets. Moved to the Millennium Stadium after York City canceled the availability of Bootham Crescent.

The Oceania Cup matches re-scheduled for June 20 between the Kiwis and the Tonga Invitational XIII.

All rugby league fixtures, from the Betfred Super League to “the community game, postponed till April 3.

England coach Shaun Wane’s first get-together with his new squad. It is for Old Trafford on March 23 postponed.

The Manchester Marathon, due to take place on April 5 with 26,000 runners is postponed also

The London Marathon rescheduled on October 4 . That originally scheduled to take place on April 26.

The Paris Marathon that was due to take place on April 5, is also rescheduled on October 18 and the Rome Marathon for March 29 and Boston Marathon for April 20.

All athletics activity including competitions and leagues, member clubs, running groups, and races suspended until April.

The first three Diamond League meetings of the season – scheduled for April 17, in Qatar, and May 9 and 16, in China postponed till the Olympics.

The World Indoor Championships that to take place in Nanjing in China rescheduled for March 2021.

The British Horseracing Authority initially confirmed that they will host all meetings behind closed doors, but later announced that all racing in Britain would be suspended until the end of April.

Racing in France are suspended until April 15.

The Grand National, due to take place on April 4, canceled.

All the public events around the NFL Draft canceled until April.

Besides this, New Orleans Saints’ head coach tested positive for corona. He is the first case associated with the NFL.

The Top Rank announced to postpone its shows at Madison Square Garden on March 14 and 17.

All events scheduled for March in Japan canceled.

The British Boxing Board of Control announced to cancel all public tournaments and the situation will be reviewed in early April.

The Miami Open tennis tournament that was scheduled for March 23, is canceled. Due to a ban on mass gatherings in Miami-Dade County.

The Volvo Car Open in Charleston also called off that was going to held in Budapest.

The French Open moved from its scheduled spring to September.

The ATP and WTA also rescheduled the tennis season until June 7.

Bellator 241 event also scrapped that was going too held in Connecticut.

Japan’s Olympic minister Seiko Hashimoto said that they could postpone the Tokyo 2020 Games until later in the year.

The Olympic boxing qualifier in London canceled that initially going to hold behind closed doors.

The Greek leg of the Olympic Torch Relay also canceled after the first flame-lighting ceremony.

Football Leagues around the world

The Premier League, EFL, and Football Association announced that professional football in England rescheduled for April 30.

Wales’ international matches with Austria and the United States at the end of March called off.

UEFA Under-21 European Championship, the 2021 Nations League finals, and the Women’s Euro 2021 called off.

All Scottish football suspended with immediate effect, with the Scottish Football Association confirming it will not resume until April 30 at the earliest.

The Irish Football Association suspended sessions in Northern Ireland until at least April 4.

The Women’s Super League and FA Women’s Championship postponed by the FA.

The RFU has also closed all league, cup and county rugby in England with a five-week suspension.

Rugby Australia also shut down its Sydney headquarters after two members of its Australian Sevens program tested positive with coronavirus.

The Masters at Augusta, the sport’s blue riband event is also postponed.

The US PGA was postponed to a date later in the summer.

The Andalucia Masters is also postponed along with August’s Czech Masters.

The Players Championship was canceled along with all PGA Tour events for the next three weeks along with their events in April and May.